Free nationwide delivery on orders over £50!

Melissa is a regular at our store in Upton and has been feeding her 6 year old family pet Springer Spaniel, Tiggy, a raw dog food diet ever since getting her.

In our latest article we are taking a look at Melissa’s story of how she and her family had to cope with a surprise litter of 11, yes 11 pups and how she gave them the best fighting chance weening them on to a raw dog food diet.

Melissa is a regular at our store in Upton and has been feeding her 6 year old family pet Springer Spaniel, Tiggy, a raw dog food diet ever since getting her. The family had considered having Tiggy spayed but held back from doing it with a potential view to breeding her when the time was right. However, the time had never been right for them so they hadn’t gone ahead with it.

Earlier in 2021 the family decided they would go on a last minute holiday with some friends. Due to the timing they couldn’t get Tiggy booked in at the kennels so agreed that they would just take her with them. They were going with some family friends who also had a dog. The friend’s dog is a male Cockerpoo and the two dogs were friends and played well together, so there was no concern about having both dogs with them on the holiday. 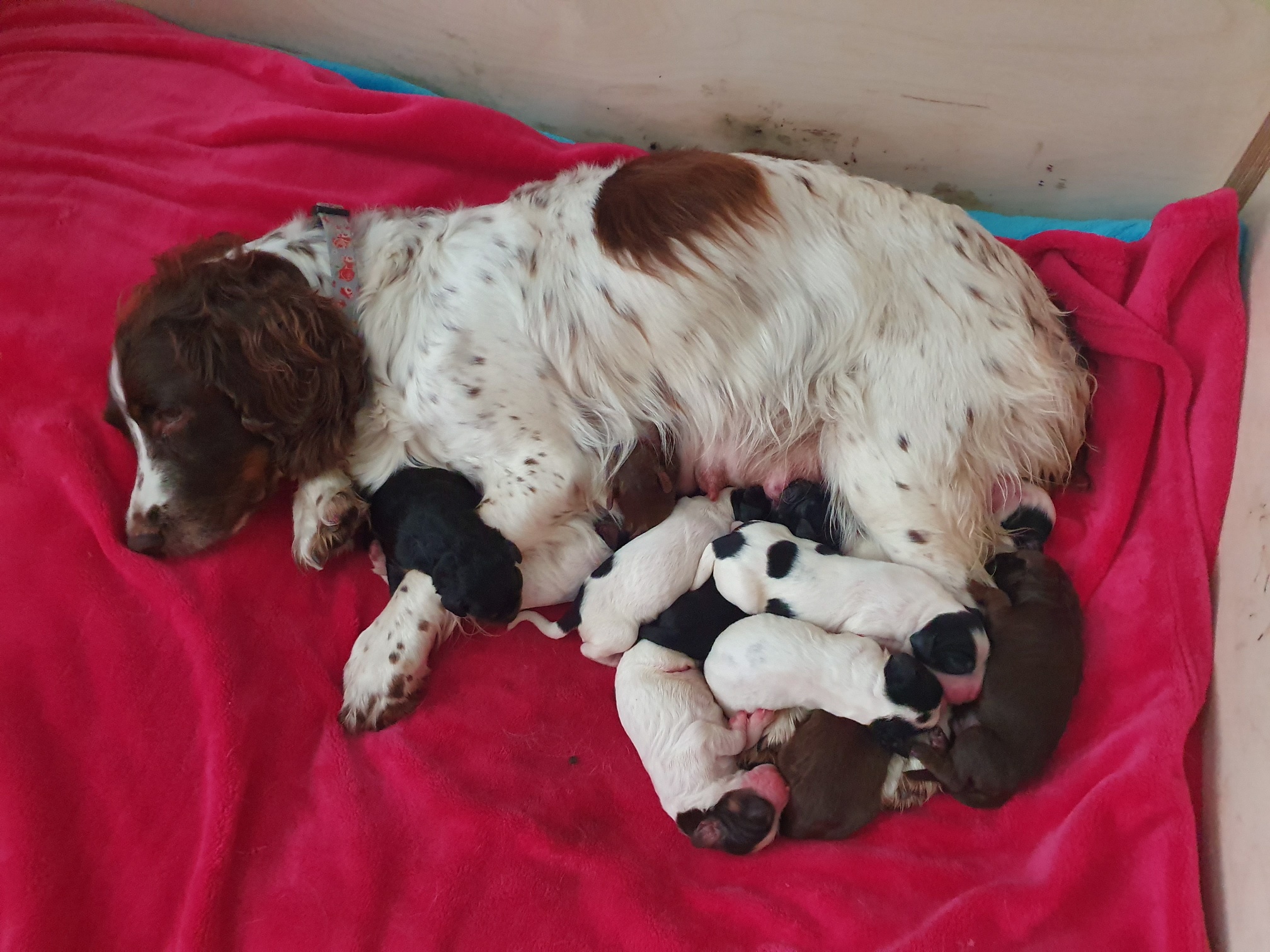 Unfortunately, just before they were due to leave, Tiggy came into season.

Unfortunately, just before they were due to leave, Tiggy came into season, so both families all agreed to keep the dogs apart and make sure the Cockerpoo didn’t get to Tiggy. The Cockerpoo was desperate to get to Tiggy, anxiously whining and barking. All was going well until one of the children accidentally left a door open and the Cockerpoo got to Tiggy and from that point it was too late.

Just over 2 months later, Tiggy started giving birth to her litter. She birthed 4 pups without issue and it looked like everything was going to go smoothly but the 5th was breech so they called the vets and agreed to get her in as soon as possible. However, on the way in the car the 5th worked its way out with Melissa’s son bravely helping in the back seat. Sadly, it looked like it wasn’t breathing and was in trouble. When they arrived at the vets they handed over the pup that wasn’t breathing and Tiggy so that the vet could examine them both. After scanning Tiggy the vet thought there may be at least two more puppies and explained that they would like to do a caesarean section to save further complications for Tiggy.

As it turned out, the caesarean was a good idea, as Tiggy went on to have a further 7 pups. 13 in total! Sadly 2 of Tiggy’s litter didn’t make it but amazingly 11 of them did. 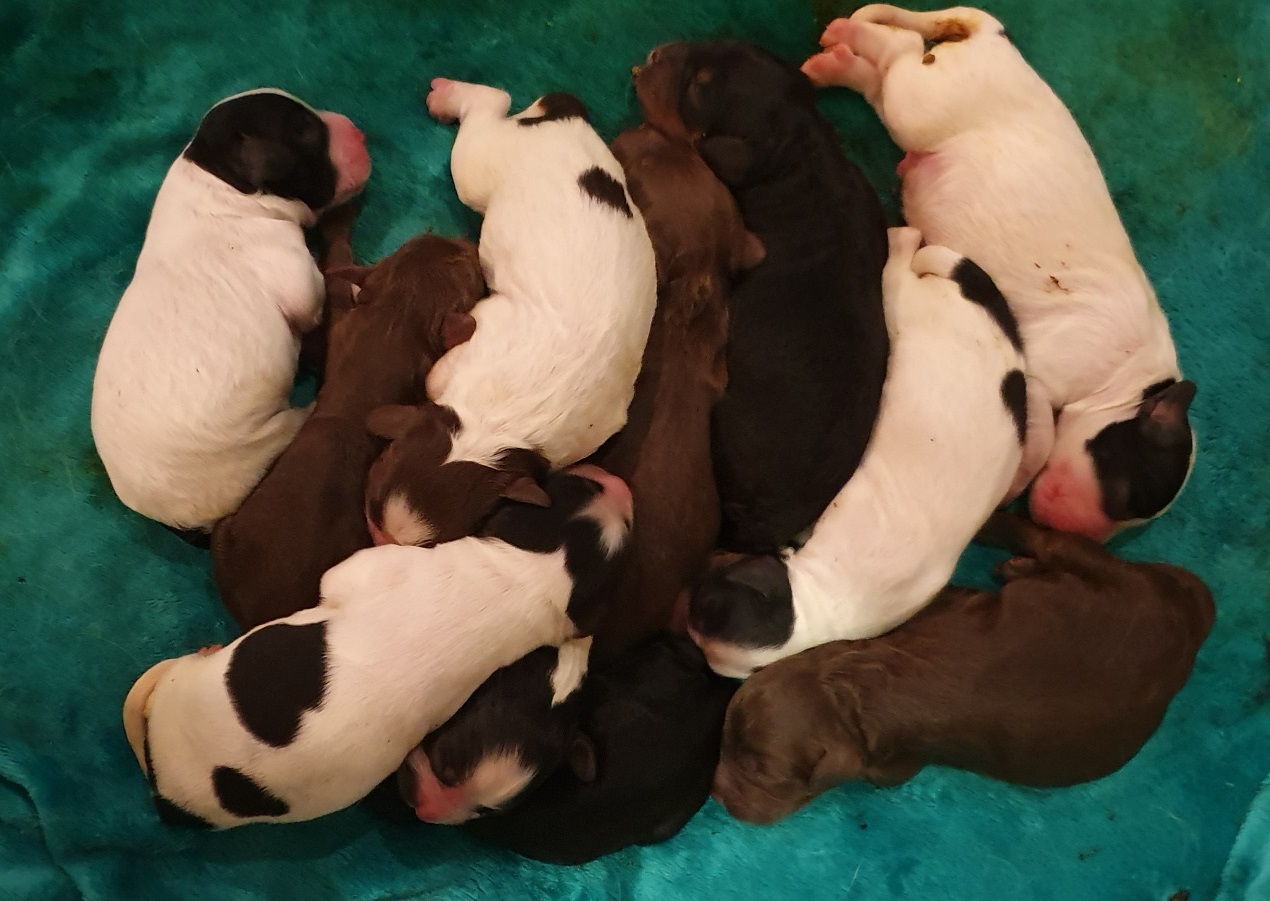 Melissa was initially unsure of how best to feed the pups so she took a trip to see the team at our Upton shop.

All were fit and healthy except for one female, the runt of the litter. The family bottle fed her to give her a better chance of survival as the vet had stated she may not make it. She was still feeding from Tiggy as well as having a bottle, but wasn’t as big or strong as the remaining pups. She also wasn’t opening one of her eyes properly when all the other pups had opened both eyes.

Melissa eventually decided to have the vet take a look at the weaker one to ensure they were doing everything they could to give her the best fighting chance of survival. As it turned out, the little one only had one eye.

Having never raised a new born litter before, Melissa was initially unsure of how best to feed the pups so she took a trip to see the team at our Upton shop. The team in turn got one of our specialist team here at Nurturing by Nature to give Melissa a call to go through everything with her. Sue Morris called Melissa back and went through the best types of raw dog food to start them on and the amounts they should be having

The pups were weened onto raw dog food starting with an easily digestible free range raw chicken mince, one teaspoonful at a time, and slowly increased the amounts as the days and weeks passed. Melissa also slowly introduced different types of proteins to give them as diverse a diet as they could have to help them grow healthily and happily.

The litter developed really well over the next few weeks

The litter developed really well over the next few weeks and at the eight week mark they were big and strong enough to start the rehoming process. However, this caused another problem. The family, especially Melissa’s husband, had become hugely attached to them all and didn’t want to rehome any of them, but after a lot of deliberation they all agreed that they would keep one of the boys of one of the girls.

They finally made their choices and due to becoming very fond of the little female with one eye they agreed to keep her with one of her brothers.

Melissa’s family wanted to name them after sentimentally significant people that had been a large part of their lives, so called the male Johnno after the husband’s Australian bestie because they were all born his birthday and the female Joanie after Melissa’s mother in law Joan who had sadly been taken from them too soon due to a short illness last year. Joanie the pup had shown the exact sort of fighting spirit and survival instincts that Melissa’s mother in law had always shown throughout her life.

The family, with their new additions, Johnno and Joanie are all doing really well and settling into their new lives. They now order the Nurturing by Nature Free Range Raw Dog Food Box every few weeks due to it having such a diverse range of different free range minces and the value for money it represents. They accompany that with Frozen Sprats as natural dog treats because Tiggy has always loved them and it turns out the pups do too!

We want to say a big thank you to Melissa and her family for sharing their amazing story and wish them all the best with their new brood. And we cannot wait to meet the new additions at our store when they are able to do so. 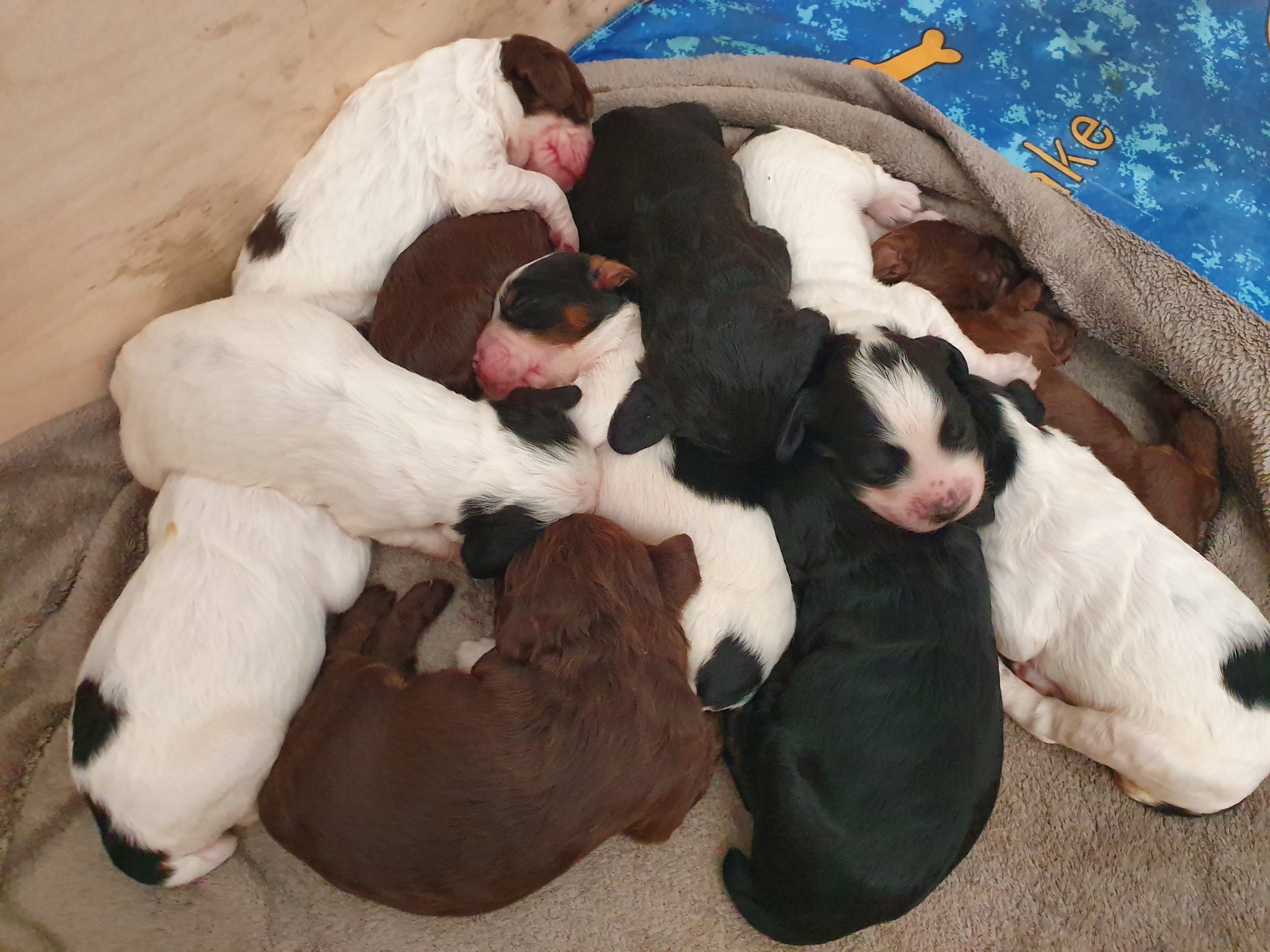 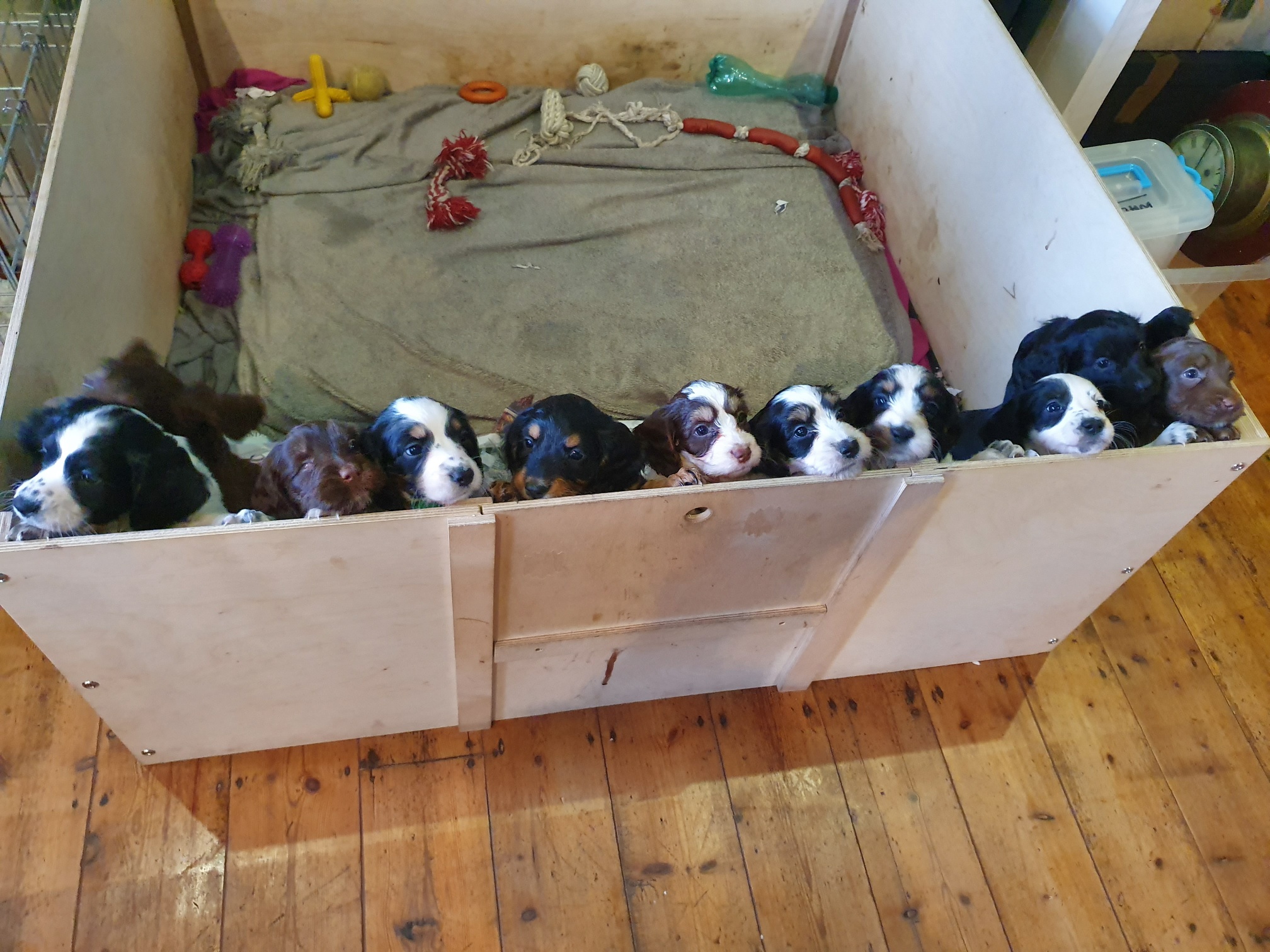 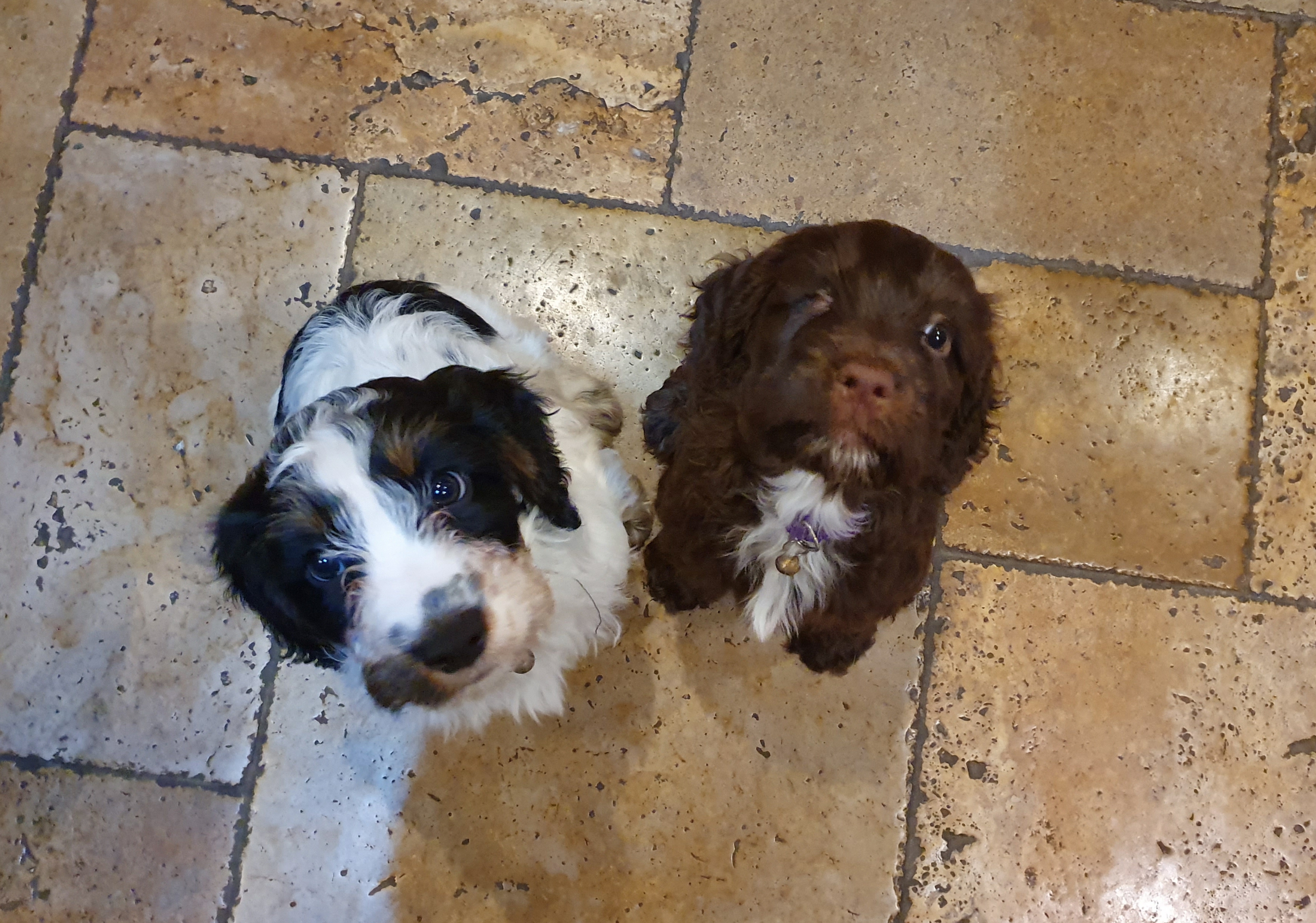 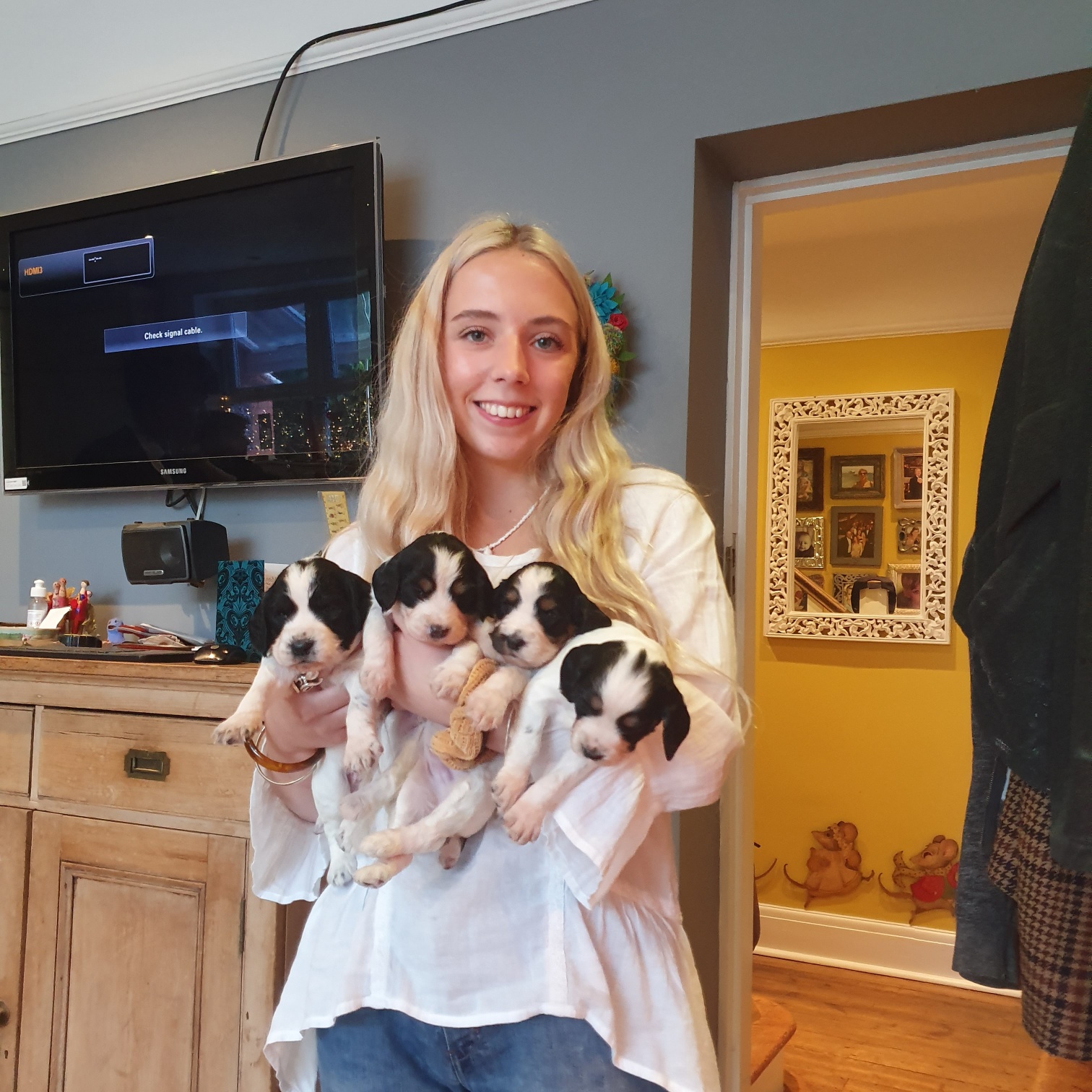 If you have a story that you would like to share with us then please do get in touch as we’d love to hear from you.

Sorry about that! It looks like we’ve run out of stock for that product. Sign in below and we’ll send you an update when it’s back in stock.

Register
Register
Fast and free! Register for an account today to buy from our range of raw pet food products